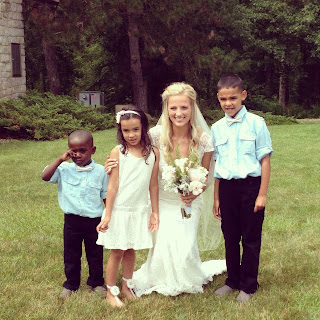 You might remember our wonderful nanny/family assistant/babysitter/friend Bayley. She got married this summer and graciously involved our three big kids in her wedding: Simon as ring bearer, Charlie as sign bearer (it's a new cute trend that you're very familiar with if you're on Pinterest) and Talya was the flower girl.

We've been blessed to have Bayley as an unofficial part of our family, and it was an honor to watch her begin her new life with Evan. The following is a letter I wrote to her on her birthday last week. She is allowing me to share it with you all - and I'll also include some cute pics of the kids. And, look, I found a way to link to her amazing wedding pictures.

Dear Bayley,
Your wedding was beautiful, which was only a little surprising because the day had the worst possible weather forecast. Even knowing that, there couldn’t have been any of us there who know you who actually believed that YOUR wedding day would be anything other than beautiful - because of who you are: glowy-beautiful, inside and out.

Ever since I got diagnosed, wedding vows make me cry. Because you really have no idea what you’re signing up for, but you go ahead and make the most permanent promise of your life, based solely on knowing the person you’re promising.

I’m a cynic. You know that. So, you wouldn’t be surprised that when I hear young kids say those words, part of my brain does a mental eye-roll because I got married young too. And, I know that when you say, “In sickness and in health,” you picture a romantic night in, cuddling on the couch with chicken soup and Vicks. And I also know that what you actually get is a big fat tumor on your brain that somehow makes you so constipated, the word “romance” sounds like nails on a chalkboard.

And your wedding... well, if a cynic was looking for a place to roll around in the mud, your day had all the needed dirt. Painfully beautiful couple, supportive family and friends, husband who sings during the ceremony, you’re not old enough to drink yet, and even the weather decides to cooperate when it’s not supposed to. I mean, blech.

Except, it wasn’t blech at all. And I’ll tell you why. Because when I looked up at the front row, there was your mother-in-law in a wheelchair. Living with a disease that has robbed most of what she should have had in her adult life. And next to her was her husband, who I’m sure would have carried her to light her candle if he’d needed to.

A cynic says, “those kids have no idea.” But who can say that to you? Because you do. You and Evan know what you’re getting into. You know what “in sickness and in health” means because you’ve seen it, grown up with it, and haven’t run from it. You know that “for better or worse” can mean some really hard things. You know that even though God held back the storms on your special day, He may not choose to hold them back on your life.

And, you know that the possibility - no the certainty - of rain is what makes the sun so  beautiful.

And, so when you said those words, and Evan said them back to you, I cried, but I didn’t roll my eyes. I beheld the beauty of your in-laws’ and of my own husband's faithful love, and I prayed. I sort of feel the need to confess what I prayed, because part of me feels guilty about it.

God, let them know sickness along with health. Let them be richer and poorer. Let them have better and worse. Give them the opportunity to live out every single vow they’re making, because it’s not the promise that makes a marriage sweet, it’s the keeping it.

It’s not just marriage, of course. Every person gets the chance to live a life of complete fulfillment in trying circumstances. In Philippians 4, Paul says, “I know how to be brought low, and I know how to abound. In any and every circumstance, I have learned the secret of facing plenty and hunger, abundance and need.” It’s kind of become a cliche that suffering brings us closer to Jesus - I’ve always believed that while secretly hoping I didn’t ever need to test that theory. But, I have had to test it. I’ve been brought low and I’ve abounded with joy. I’ve lost things that were precious to me. And, even in my faith, I still feel the full weight of those losses. But, just like I’ve relished the chance to know Ben in sickness and health, plenty and in want, I get to know Jesus like that too.

I am so privileged to be a part of your cloud of witnesses, not just as you made your vows, but as you keep them. You are a beautiful woman and child of God.
Love,
Susie