Things I Want to Say

At radiation today, there was a film crew there with WDTN. And well, I have a baby. And a brain tumor. Which is obviously pretty exciting. So, they asked if they could sit down with us and my doctor and do a little interview. Which is supposed to be on tv tonight at 5:00. We'll see. If some nutso decides to take Kroger hostage or something, I'm sure I'll get bumped.  If it's on, it will be short and sweet, and I'll ramble like an idiot and still only say a tiny fraction of all there is to be said. So, here's the rest:

2) I think the point of the news story is to focus on the technology that exists to treat things like brain tumors. And, really, it's pretty amazing. I have a lot to learn about it all, but I want to learn it all. I wish I could sit there and watch someone else get their brain radiated while I asked a zillion questions. But, I'm pretty sure that would violate HIPPA and stuff. So, I just take my turn lying on the table, listening to the machines whir around me, and I imagine all of the crazy stuff it's doing and how much planning went into it, and I am amazed. It is so strange, but the times I've spent lying on a table, crammed into a tube, and/or smothered under a mask, have been the most devotional moments I've gotten to experience over the past crazy months. When you can't see or hear much, and there's a foot-thick door separating you from the world, and there's no way to know how the story goes, but you know how it ends, what else is there to do but worship? And rest and trust. Believe me, it's easier to do those things when you can't do anything else.

3) We live in southwestern Ohio. It has a reputation for being a little lame. But I love it here. One of my dream jobs is to do PR for the Miami Valley because I just love it so much. In March, I was at a conference where a lot of jokes were made about the medical care here in the Dayton area. And, I just kept thinking, I just had brain surgery here. With a teeny baby in my womb. And it was fine. (I just showed how not qualified I am for the hypothetical PR job by starting my pitch with "a little lame.")

5) My favorite thing about radiation therapy is the planning process. I know absolutely nothing about it, but it strikes me as remarkable. Unlike a drug, where years of research and testing go into creating it and then you put it in your body like a bomb and hope it works, a plan for radiation therapy is specifically planned and tailored to each patient. In my case, Dr. Einstein promises that he planned to minimize the exposure of my scalp, to protect my hair. Unless you're 33 years old, have had long hair your whole life, and are as vain and shallow as I am, you have no idea how much that means to me! Also, that completely validates the fact that I have (because I'm vain/shallow/psycho) intentionally gone to every dr. appt with "good hair" so that they can see how important it is to me to keep it.

That's all for now. Oh, and like Ben awkwardly mentioned, I stopped nursing Annie after two weeks of feeding/pumping around the clock which has been one of the more uncomfortable things I've ever experienced in my whole life. Five days later, I am finally not sending Ben out to the store every night for cabbage leaves. Victory. 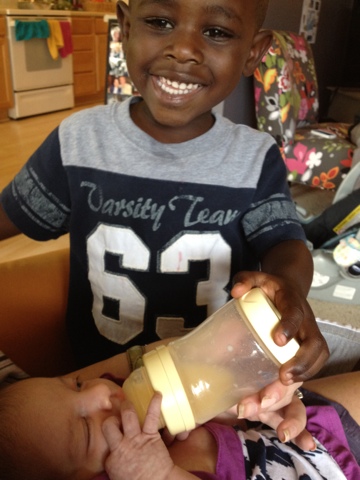